Among the 100 Formula 1, Le Mans and legendary racing cars that will competing, the grid includes the Ferrari 643, driven by four-time F1 champion Alain Prost in the 1991 F1 season, and the Rothmans Porsche 962 – a car with a rich pedigree, which won the 1987 Norisring ‘Money Race’ with 1994 Le Mans champion Mauro Baldi and F1’s Jonathan Palmer.

The Benetton B192, which claimed victory at the 1992 Belgium Grand Prix and also marked the first of Schumacher’s 91 triumphs in F1 and the Hesketh 308B, raced by James Hunt, 1976 F1 world champion, will also be part of the impressive line-up.

With Dubai Autodrome hosting top international and local motorsport events, the return of the Gulf Historic Dubai Grand Prix Revival is of huge significance to the venue. 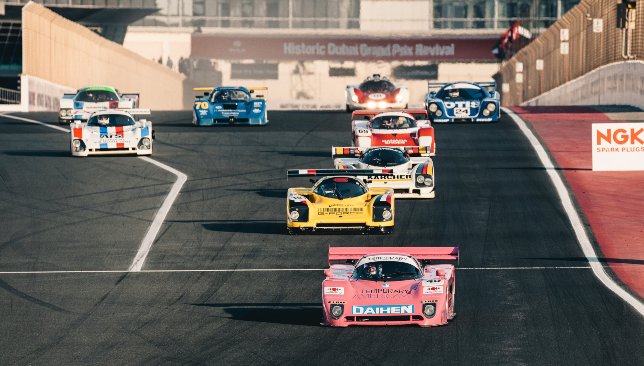 Faisal Al Sahlawi, General Manager of Dubai Autodrome, said: “The Gulf Historic Dubai Grand Prix Revival holds a very special place in my heart, having been fortunate to visit the Goodwood Revival a few times previously. It’s something that I’ve always wanted to have on a similar level in the UAE.

“After last year’s successful tribute to the 1981 Dubai Grand Prix we are ecstatic to be hosting the second edition. This year the number of iconic cars racing has increased significantly, as have the off-track entertainment options. The Gulf Historic Dubai GP Revival will be a family-friendly festival and we encourage everyone to purchase their tickets now and be part of this prestigious event.”

As well as the racing action, fans can access the paddock and grandstand and get up close to the legendary motorsport models. There will also be a classic car show, featuring some of the rarest and most beautiful cars from the UAE’s most dedicated car collectors, while the event’s inaugural Concours d’Élégance will provide plenty of opportunities for fans to enjoy some of the world’s finest road cars.

The paddock will also host a festival of music, culture and food for fans of all ages to enjoy while the Apex Garden will offer festival goers an opportunity to watch all the on-track action on a live-streaming cinema with younger fans able to explore the kids’ play area.

Pierre Brice-Mena, Managing Director of GP Extreme, organisers of the event, said: “We are looking forward to welcoming fans back to the Dubai Autodrome for the second Gulf Historic Dubai GP Revival. Whether you are a diehard motorsport fan, or completely new to the sport, there will be something for everyone to enjoy.

“Complementing the scintillating on-track action will be a festival of music, culture and luxurious hospitality. There will be no shortage of entertainment across the race weekend, and fans from across the globe will be able to immerse themselves in the glamour and excitement of the motorsport world.

“We can’t wait to see all the fans this November, where the exhilarating racing will be matched by the buzz and vibrancy of the paddock.”

General admission tickets and hospitality packages can be purchased by visiting www.ticketmaster.ae.